Why Russian Should be the Next Language You Learn

Russian used to be a popular language to learn in the United States during the lead up to and duration of the Cold War. For all the talk of Russia these days in our news, it feels like Russian might be just as important today. With a continuous presence on any most widely spoken language(…)

Top Dialects of the Russian Language 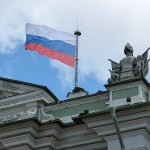 Russia is a huge country: it’s the world’s largest nation in terms of area, and spans two continents. And with a population of nearly 150 million, it’s one of the top ten most populated countries in the world. Given Russia’s vast size, you might expect that there would be significant dialectal variation in the Russian(…)