Tag Archives: language of the future

Frisian: A European Language of the Future? 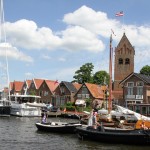 We recently looked at the various forms of German, from standard German all the way over to Swiss. Now, we’d like to take a further look at Frisian; a language often accused of being merely a dialect of German instead of a language in its own right, and one that is one of the closest(…)