Dyslexia and Learning a Foreign Language 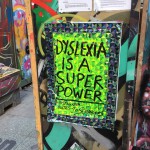 Dyslexia as defined by the National Institute of Neurological Disorders and Stroke is “difficulty with phonological processing (the manipulation of sounds), spelling, and/or rapid visual-verbal responding. Individuals typically read at levels significantly lower than expected despite having normal intelligence.” Approximately 10-15 percent of English speakers deal with dyslexia on some level “affecting over 40 million American(…)