From Water Fights to Flying Candles: A Year of Festivals in Thailand 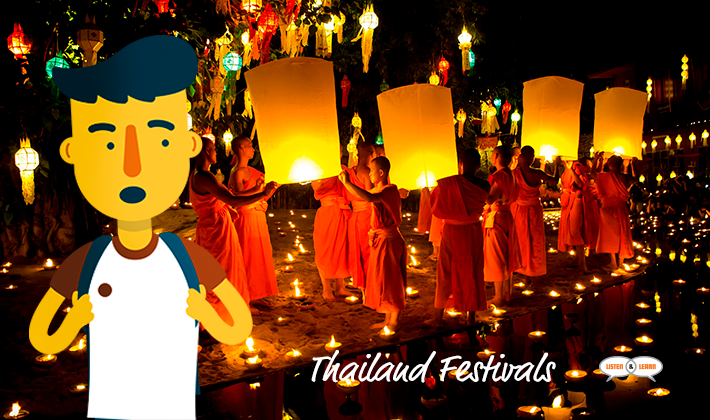 Thailand is known world-wide as a party destination which is, in some ways, due to the fact that the Thai love to party. There are 20 official national holidays on the calendar in Thailand and about ten religious ones as well that add up to around 50 weekdays off a year.

Thais celebrate New Year three times: January 1st, January 28th for Chinese New Year and again in April for the Thai New Year. As if that weren’t enough though, Thailand also absorbs celebrations from other cultures and countries, such as Halloween and Valentine’s Day that are as important in Thailand as in the United States.  Lastly, on top of all of this, every full moon is a Buddha Day and there’s a smattering of royal birthdays that about half count for a party.

So, in an effort to not make an almost endless list, we’ve done our best to compile a list of festivals and celebrations  to highlight. Think you can handle it?

To start, the granddaddy of all Thai holidays is Songkran.

This Thai New Year celebration can last anywhere between three days and two weeks depending on where you live. Songkran takes place on the vernal equinox (the end of March), a traditional time across South East Asia to celebrate the end of the dry season and welcome the coming rain. It’s meant to be a celebration of renewal, rebirth, the survival of hard times and, more importantly, bounty to come. Traditionally Songkran was a time to join with family, venerate respected elders and pray to the field spirits for a good crop .

Songkran today is a bit different, however. In most towns the celebration lasts for three or four days and consists of water play. That is, people standing by the side of the road tossing buckets of water or aiming hoses at any passersby; whether they be pedestrians, cyclists, dogs or vehicles. This all culminates on the big day, when the moon is full. The streets are jammed with roving pickup trucks loaded with fifty gallon drums of ice water and anywhere from ten to thirty drunken revellers throwing water at everyone and everything that moves to the pounding beats of speakers so old and water damaged there is no definition to the music, only the screeching of feedback.

Depending on your temperament, Songkran is either a great multi-day party or a week when you stock up and lay low in the air-con of your house. It’s one of the two times a year, the other being the week between Christmas and New Year’s, that the already-high road fatality rate soars. 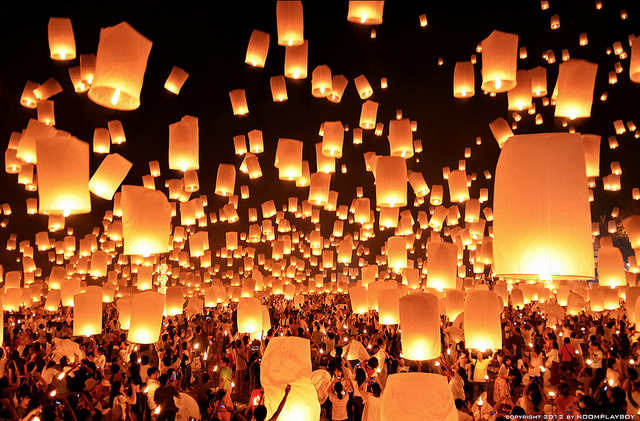 From the chaos of Songkran we move to the beauty of Loi Kratong. Celebrated on the first day of the full moon of the twelfth month, it’s a spectacle where people gather at temples near rivers or any other place that holds a large body of water to release a Kratong, a decorative offering traditionally made of banana stems, leaves and flowers, but today likely made of Styrofoam and plastic with a candle and joss sticks/incense stuck in the middle. Letting the kratong float away on the water represents letting bad luck flow away.

Traditionally, this was a way to honour the water spirits and wash away the bad karma of the old year. It is also said that by simultaneously releasing your kratong with your loved one you can predict whether your relationship will last depending on whether the kratong float together or if the current pulls them apart.

In addition to the kratongs floating on the water, there will be khom loy filling the air. Khom loy are essentially large white paper bags with a beeswax candle suspended in the mouth. When the candle is lit the bag fills with hot air and floats off into the sky. As the kratong stream down the river with flickering candles releasing their fragrant aroma, the sky is lit with streams of khom loy slowly disappearing into the night. As per tradition, people would put their address on the bag so if someone found it they could return it and get a small reward, thus making good merit for both finder and sender. Alas such genteel practices are part of the past. Who knows, perhaps there will be a way to geo-tag using some loi kratong app in the future so that parties can exchange Snap Chat videos while never having to actually meet one another. One can dream. 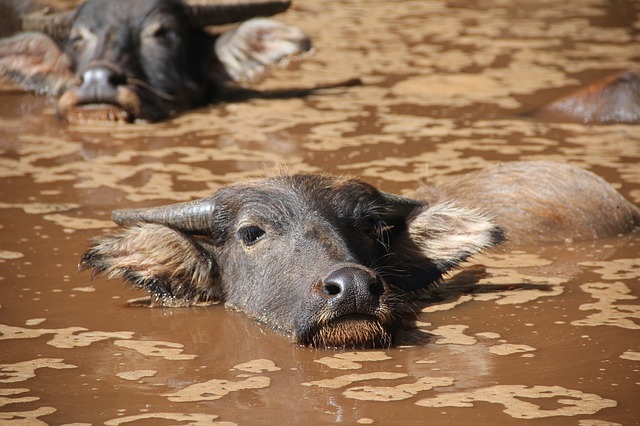 An annual event that doesn’t receive much international attention, but is one of my favourites and the only one in the world of it’s kind, is the annual Chon Buri Buffalo festival. Three days of non-stop buffalo-related events, including: healthiest buffalo contest, Miss Thai Farmer beauty contest, the buffalo cart parade, buffalo wrestling (yup, that means buffalo-on-buffalo) and of course heat after heat of buffalo racing.

The festival is a reminder of the key role buffalo once played in Thailand as the all-purpose beast of burden that kept the rice bowl overflowing. These days few people keep them and they are disappearing from their mud wallows across the countryside. This serious side to the festival is easily forgotten though when swept up into the raucous company of mud-covered farmers parading their best animals among head-hammering music and constant drink. 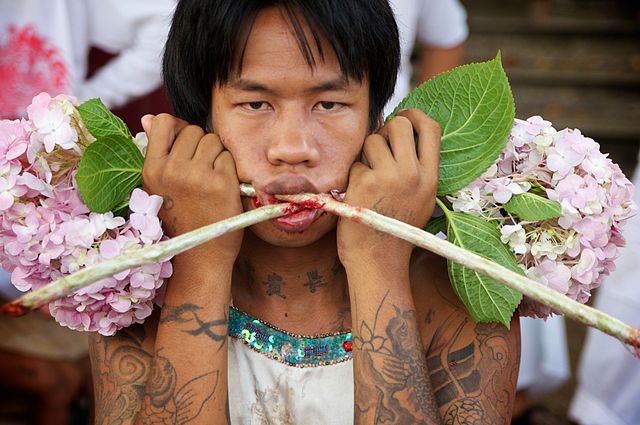 It’s all the rage. Get a little stud set in the corner of your mouth and everyone will know you’re a rebel. Put a metre-long skewer through your face, hang some watermelons at the end and you’ll be part of the vegetarian festival.

This annual nine-day festival in October began a couple of hundred years ago on the island of Phuket when a Chinese opera troupe was stricken with fevers while visiting to perform. After being put on a vegetarian diet, they all recovered and this built into what is now a national celebration marked by vegetarian everything from fish maw to to pork shoulder being sold on the streets.

But it’s not only about food. Some take this time to abstain from all earthly delights: booze, sex, lying, stealing, killing (it is only nine days after all). People dress in white and invite Chinese spirits to cleanse their souls. To prove they are truly possessed, participants take to the streets performing acts of strength and self-torture by walking on coals, bathing in boiling oil, climbing up bladed ladders, and, of course, running huge skewers through both cheeks and then weighting them with fruit, vegetables and flowers.

So there you have it. Of course, this is hardly scratching the surface. Sure you could read up on all the different things to do and see, or maybe you could just go to Thailand and see for yourself. Regardless, whether you find yourself in the Land of Smiles or you get sucked into a Wikipedia black hole, do a little more research and satisfy your inner culture vulture by joining in on rituals of the sacred, profane and just plain odd.