Scandinavian Languages: All You Need to Know

The three main Scandinavian languages—Danish, Swedish and Norwegian—are consistently ranked among the easiest languages for native English speakers to study according to the Foreign Service Institute (FSI). But mastering them still requires effort. Typically, learners need between 575 and 600 study hours to become fluent in any of these languages.

Now, while this is a big dedication of your time and energy, we have good news for you! Danish, Swedish and Norwegian are actually quite alike, and if you learn one of them to a high level of proficiency, you may be able to get by using that language in the other Nordic countries.

However, they are only mutually intelligible to a certain degree and there are differences you should know if you want to save yourself some misunderstandings. Let’s explore them below!

Why Are Danish, Swedish and Norwegian Similar?

As Norse speakers settled further away from the original homeland, encountered new cultures and languages and interacted decreasingly with other Norse men and women, the language of various groups evolved from a common tongue to have different pronunciations, grammar and vocabulary.

Eventually, Danish, Swedish and Norwegian formed. Still, as they all developed from Old Norse, they are considered sister languages. Furthermore, all belong to the North-Eastern branch of the North-Germanic language family, so they bear yet more similarities than, say, Icelandic and Faroese. These are also Scandinavian languages, but part of the North-Western branch, which is why they are considered cousins of Danish, Swedish and Norwegian, not sisters.

How Alike Are the Three Scandinavian Languages?

The three languages are comparable enough to be considered mutually intelligible, but to different degrees. For example, while Norwegian and Swedish are similar in terms of pronunciation, the vocabulary of each language can differ greatly.

Certainly, Danish is the most unique of the three. Consequently, Danes have more trouble understanding their Scandinavian neighbours. Nonetheless, Danish and Norwegian resemble one another in terms of spelling, and speakers understand each other when they communicate by text.

One thing which illustrates the differences in the three languages is that although Swedes, Danes and Norwegians can understand each other if they make the effort, some prefer to switch to English as a means of mutual communication.

How Do They Differ?

If you ask a speaker of one of the three languages what they think of the other two, you are likely to hear a sarcastic comment about the way the others speak. This difference is most pronounced in Danish when compared with Norwegian and Swedish.

For example, Norwegians may mention the Danish stød, a glottal stop, which sounds like a sort of hiccup. Danes also tend to shorten words and swallow the endings, so there is not much correlation between the way they speak and the way they write.

In the case of Swedish and Norwegian, the differences in pronunciation are not as marked as with Danish. Most of the vowels and consonants are almost the same in the varieties spoken in Stockholm and Oslo, although there are some regional variations as you move into the countryside.

Also, both Norwegian and Swedish use tones and word stress to convey meaning. For example, in Swedish, the word anden with stress on both syllables means “the spirit”, while anden with the stress on only the first syllable means “the duck”. Likewise, the Norwegian word bønder, which means “farmers”, is pronounced a lot like bønner (beans), with the major difference being the tone used.

False friends are a common problem between the three languages. This term refers to words that are the same or similar in two languages but mean different things.

For example, if a person from Denmark wants to compliment his Norwegian friend, he might call them rar, which means “cute”. Unfortunately, the friend will probably not appreciate this since, in their language, the words means “strange”.

The reverse is true if a Norwegian tells his Danish friend he likes their kneppe (shirt). The friend may get offended, since this is the Danish equivalent of the F word.

Swedish is not an exception either. If a Swede and a Norwegian agreed to have a roligt night, the Swede will prepare to party, while the Norwegian will get ready to relax and maybe watch a film.

Still, these false friends are few and far between, so once you learn the most common ones, you will spare yourself some embarrassing confusions!

Danish and Norwegian are much closer in this aspect than either is with Swedish. This is because Norway was part of Denmark between the 14th and 19th centuries. Since the centre of power was Copenhagen, everything, from decrees to scholarly books, was printed there. 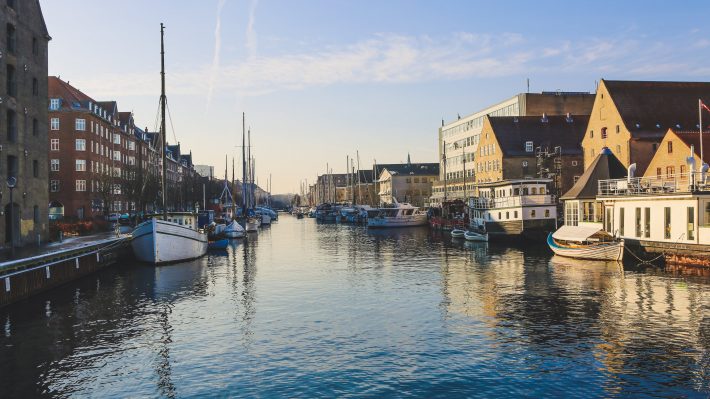 Photo of Copenhagen by wirestock via Freepik

This can be seen in the spelling of some common words, like “name”. While they spell it navn in Norwegian and Danish, it is written as namn in Swedish. Also, Swedes use jag to say “I”, while Danes and Norwegians use jeg.

Which One Should I Choose?

If you plan to learn just one of the Scandinavian languages and use it in the other two countries, your best bet is Norwegian.

Norwegian spelling is very close to that of Danish, so you’ll be able to communicate with Danes by text and read signs, etc. easily.

Meanwhile, Norwegian sounds a lot like Swedish, and Norwegians have a lot of contact with the latter language through TV, since they watch lots of Swedish shows. Norwegians and Swedes even co-produce some programmes, like the talk show Skavlan. So, with a little extra effort, you will understand Swedish speakers as well as you do Norwegians.

Still, this is not as clear-cut as it may sound, and you should choose a language based on other factors, too, like in which country you are going to spend more of your time.

If you would like to get started with one of the Scandinavian languages with the help of an expert native tutor, you’re in luck! Our Danish, Swedish and Norwegian courses are all tailored to your needs and requirements.