7 delicious Christmas sweets from around the world

This entry was posted in must know, serious and tagged on December 17, 2018 by Kelly .

For many of us, Christmas is just a great excuse to overindulge. We get to buy and receive extravagant gifts, stay out later than we probably should at Christmas parties, and possibly put on our own weight in food. There is nothing quite like all the seasonal snacks we get to cram our faces with; here are some of the sweet treats people around the world will be sinking their teeth into that are both similar and different from our own! 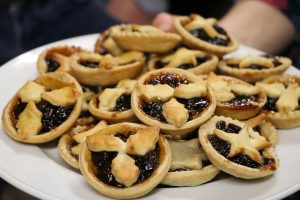 Okay, so we’re starting closer to home, just because we can. The origins of this spiced fruit pie is less palatable than you probably want to hear about, but today the mince pie is one of the festive necessities in many UK households. Full of mixed peel, dried fruit, and an overly generous measure of brandy or rum, these pies can be served hot or cold and are eaten alone or with ice cream, cream, or custard. We know that some people don’t like them but honestly, if you’ve never tried a mince pie we think you might be missing out.

These vanilla crescents are sweet little biscuits that you’ll find in most Austrian markets and bakeries around Christmas time. They can be made with walnuts, almonds, or hazelnuts, and some are even half-dipped in chocolate. In some homes, vanillekipferl are decorated and hung on a Christmas tree but they are far too moorish to last very long if they are in plain sight like that!

Piernik is gingerbread, which will probably already be making your mouth water just thinking about it! Like the Christmas cake and pudding in the UK, the piernik is made weeks in advance. This dense spiced honey flavoured bread is baked, teasing you with festive scents, then left to ferment for as long as you like; recipes vary of course, but traditionally this is a six-week turnaround.  When the piernik is ready it is then layered with plum jam and covered in a chocolate ganache that you will often see decorated with edible gold. 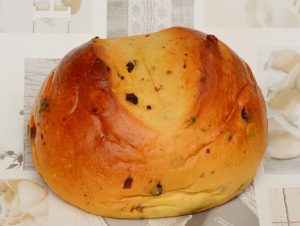 Yes, this does translate as Easter bread, but that doesn’t mean it isn’t a Christmas food! The pan de pascua is a mixture of stollen and panettone, a Christmas cake that is light. The sponge is infused with honey and ginger, and you’ll find a variety of nuts and dried fruits as well depending on where you try it. Every family has their own take on the recipe as well. Pan de pascua can be eaten alone but is often served with another Chilean Christmas essential cola de mono which means monkey tail but thankfully isn’t literal!

It isn’t Christmas in Hungary without these sweet treats in the home! Typically szaloncukor are made with fondant then dipped in chocolate and wrapped in shiny foil. These make the perfect decoration for the Christmas tree if you can resist the temptation to eat them! Szaloncukor may be flavoured anything from rum and chocolate to yoghurt and fruit, though traditionalists will insist on just that plain fondant.

Gallette de rois is associated more with being an after-Christmas treat than a pre-Christmas one but who could resist sampling them a little earlier? This is puff pastry that is typically filled with frangipane cream, though you might find versions with jam, fruit, chocolate, and even for some with cheese. Traditionally eaten on Epiphany each gallette de rois contains a fève or charm. Whoever is lucky enough to find it is crowned king or queen for the night (or is nursing a chipped tooth).

The first time you bite into one of these you’re probably going to make a mess. Polvorón are essentially a heavy and crumbly shortbread biscuit. They are made from flour, sugar, milk, and nuts and flavoured with cinnamon and lemon zest. When sold in shops polvorón are traditionally small and wrapped in a waxy paper, though homemade ones are on the larger side and come in all sorts of shapes. If you’re a shortbread dunker beware because you’ll definitely end up with bits floating in your mug!

We don’t know about you, but we’ve worked up an appetite just thinking about all of these things. Anyone for a mince pie?