This entry was posted in glutton, hooligans, language guru and tagged Chine, learn mandarin, netflix on December 3, 2020 by Kelly .

As you’d expect for the most widely spoken language in the world, Netflix has a huge amount of films, shows, and dramas available in Mandarin. There is so much to choose from that you might be either overwhelmed or spoilt for choice! Here are five of our favourites to get you started.

A Love So Beautiful

If you loved Love, Simon and To All The Boys I’ve Ever Loved, A Love So Beautiful is a great series with which you can start your Mandarin practice. Xiao Xi is a sweet seventeen-year-old living a carefree life. She doesn’t like to study but is amazing at art. And if she isn’t appealing to you already then listen to this; she has been in love with Jiang Chen for just about forever, a boy who just happens to be the most talented and good-looking boy in school. Her puppy eyes as she follows him around and all the little attempts she makes to get him to notice her you’d think would be annoying but instead are enchanting. And when he finally notices her, we think you’ll be squealing at the screen! Subtitles on for this one since Xiao Xi is an excitable chatterbox. 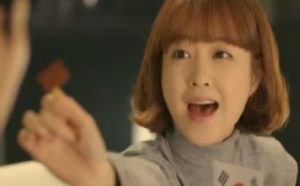 It would be nice sometimes if we had superpowers, and Strong Girl Bong-soon is about just that. The women of Do Bong-soon’s family are born with supernatural powers, and she has managed to keep hers hidden for much of her life. That doesn’t mean she doesn’t defend those in need; see her dealing with a bully in school with a grasp of her fingers, and watch her throw another over a wall.

Of course, having these powers is not what she actually wants, dreaming only of being elegant and graceful. But some people notice and appreciate her strength, like gaming company CEO Min-hyuk. Do Bong-soon is hired as his protector and learns to control her powers for good — and of course in the process, these two idiots start to fall in love! Beautiful, funny, and with a huge amount of empowerment for women, this is a great series to practice your Mandarin with if you too have days when you’re feeling small.

Learning Mandarin Chinese? Check out our free Mandarin placement test to see how your level measures up!

Illang: The Wolf Brigade is a new sci-fi action film that will have you on the edge of your seat. It is actually Korean-produced as you will find with a lot of Mandarin content, so just be aware of that when looking at any writing on the screen. The story is set a little in our future focusing on a shift in world superpowers.

China has grown in size and force, leading Japan to remilitarise and involving both Russia and the US as a result. Korea reunifies to protect itself, and the superpowers do not approve. With economic sanctions to suppress the population, society is on the verge of collapse. Enter the government’s Illang (Wolf Brigade) to keep the peace, and the anti-reunification terrorist group SECT, and watch as the population suffers around them when they clash. We are more used to seeing this kind of film based in America, and this is a refreshing shift of perspective! Subtitles will absolutely be needed for this one because you will be sucked in from the very start.

The Night Comes For Us

Brace yourself for this one, it is a little gory in places! The Night Comes For Us is a bloody action thriller that looks at the clash of rival Triad gangs. When the Six Seas massacre an entire village for stealing Triad money their enforcer Ito spares the life of a solitary young girl named Reina. He hides her in the apartment of his ex-girlfriend and has his wounds treated by a member of a gang he used to belong to. This stirs up old troubles and rivalries which result in what feels like non-stop violence, all while Ito fights to protect this little girl. You are probably going to learn a few curse words along the way with this one! The Night Comes For Us is an engaging watch — if you have the stomach for it!

Empresses In The Palace

We have to end this list of Mandarin language recommendations with something big and beautiful. Empresses In The Palace is everything you might expect visually from Chinese cinematography, yet it’s also fair to say it’s different because of the story’s point of view. The series follows the concubines of Emperor Yongzheng in the Imperial Palace during the Qing Dynasty. There is sisterhood, betrayal, and rivalry, along with the underwritten elements of love and loss. This is a beautiful watch as well as a great source for practising your Mandarin with; we guarantee you’ll be sucked in from the very first moment!

Well here at Listen & Learn we provide just that. Our teachers are all fully qualified native speaking professionals hired for their experience and their passion for teaching. So don’t be shy, place a quick enquiry now, and our friendly and highly knowledgeable customer service people are going to get back to you as soon as possible.